To me, 2021 feels like a year in which international news is depressing and good news is very hard to come by. If you are going through a tough time, my thoughts are with you. That's one reason I chose to write the Call me Dragon series - a largely lighthearted, humorous fantasy which does address some topical issues, but with levity, I hope!

Today I am delighted to announce the release of the third and final volume in the hilarious misadventures of a Dragon called Dragon, who had the good fortune to kidnap himself a black Princess.
Of course, he had no idea what he was taking on ...
Thunder o Dragon finds this mismatched pair taking on the might of the Skartunese war host together with an unlikely cast of friends. Sea Dragons knocking about in the desert? An old gladiator Dragon with a love of rolling over his enemies? A bloodthirsty, sharpshooting Princess with an even sharper tongue?
It's time to ROAR with laughter!

Thunder o Dragon is available in all Kindle Stores and on Kindle Unlimited. The Print edition should be available shortly.

The first book Call me Dragon is discounted to $1.99 for the month of July as an Amazon book of the month. Join thousands of delighted readers in this side-splitting adventure!

Posted by Dragonzrule at 12:59 PM No comments:

I am Dragon Release Day!

It's time to put down your coffee - carefully - before you pick up I am Dragon, the second hilarious volume in my Dragon Fires Rising series. 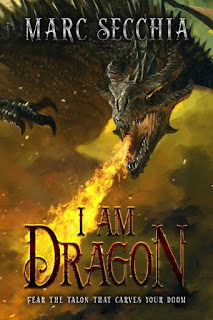 The second hilarious, epic volume in Dragon Fires Rising follows the rollercoaster adventures of a misfiring Dragon and a feisty black Princess.

Having been kicked into shape by his captive Princess, the Dragon formerly called Blitz has new fires and a new name. He is a Dragon – imaginatively – called Dragon. Now, he must discover who he is.

As simple as a Dragon shedding his own scales.

With war looming, the intrepid pair decide to fly over the Tamarine Mountains and across the oceans to the Island Archipelago where Azania’s long-time love awaits, hoping to recruit an army of fierce warrior Dragonesses. Can the Princess rescue his King? Will Dragon find his true family and avoid losing his head – literally – over his interest in Aria Seaspray?

I am delighted to bring you this side-splitting fantasy epic. Available on Kindle, Kindle Unlimited and in Print version in all Amazon stores.

Call me Dragon is also now available in Audio, and the performance by Kyle Westmaas is a real treat. Grab your copy today! We're currently working on recording audio for I am Dragon as well. More news in due course.

Posted by Dragonzrule at 4:32 PM No comments:

Santaclaws #2 Flying to a Kindle near you! 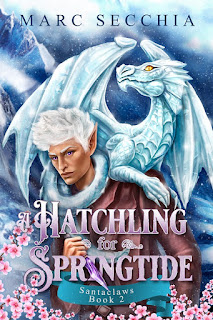 Assassins, vile plots and a diamond dragonet with a fondness for boot leather. Could anything more go wrong?
This second volume of the Santaclaws series follows Keir's quest to see his family to safety in the Elven jungles. Not everyone wants to see little paws grow large ...
Purchase now
#dragons #KindleUnlimited #fantasy
Posted by Dragonzrule at 11:24 AM No comments: