June 23, 2019
Fantasy faces the accusation of a lack of diversity both in characters and authors. Diversity of course is a word that in itself is becoming divisive - who defines what diversity means? What are the acceptable 'categories'? Who are the appointed gatekeepers? And whose diversity agenda is the most important or receives the most media attention?

For example, if I suggested my diversity card was that I identify as a 'White African', I rather suspect the responses would range between 'that concept doesn't exist' to 'oxymoron' to 'oh, that's interesting, but it isn't a REAL category.' But of course, following current trends, if I strongly identify with that category and rally enough support then at some point others simply have to accept that my mental state is cogent and legitimate. The forces behind these social movements are fascinating to watch as the world self-examines and tries to formulate exactly what diversity or identity mean.

Here, for example, is a list of African Fantasy novels. https://bookriot.com/2019/01/22/african-fantasy-novels/ Driven by a rising awareness of 'black' SciFi such as the groundbreaking Black Panther movie conceived by Ta-Nehisi Coates we are starting to see new light shed on crucial issues of identity, colour and expression. Exploring these has always been the role of good fiction.

'Black Fantasy' most often refers to fantasy penned by black authors, or starring black main characters. It is a travesty of modern society that we require the label 'black' to signal the significance of certain diverse authors or characters. Should it matter that Coates is black? Yes and no. In a perfect world we'd see far greater representation of black or brown superheroes and would not even need to point out their or their author's colour or ethnic background. And - let's not be guilty of tokenism. This movie is not a checkbox marking off one issue, 'yes, covered that one, time to move on now'. It is not feel-good moment where we ourselves on the back and pretend racism does not exist. There is far more to do in #diversityandinclusion.

I recently watched 'The Impossible', the true story of a Spanish family caught in the horror of the 2004 tsunami. Despite the moving storyline, the directorial choice of an all-white cast presenting a Hispanic family's experiences without focusing greatly on the impact on the hundreds of thousands of Indonesians who perished ... did strike me as ironic and a lost opportunity. Does it only matter that a white family was endangered in this tragedy? Is that what sells cinema tickets best? 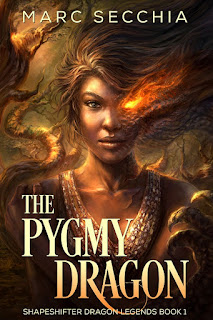 As I seek to grow as an author and as a person, I challenge myself to pick up the diversity baton and charge forward.

You many not be aware that my epic fantasy The Dragon Librarian stars a blind main character. She was an incredible and inspiring challenge to write.

The Pygmy Dragon (cover left) tells the tale of a black Pygmy girl captured by slavers and sold as a zoo attraction. She's then kidnapped by a dragon - but still faces many challenges ahead due to her differences.

This brief blog post covers a few aspects of diversity. I'd welcome your thoughts and reading suggestions! And here's my challenge back to you - why not take a searching look at your reading pile (as I do mine), and consider how diverse it is? Pick up a DIFFERENT book today. Be that person who includes.