November 26, 2016
Song of the Storm Dragon, Volume 3 of my Amazon bestselling Shapeshifter Dragons series roars away today - download a storm to your Kindle for $2.99 or free on Kindle Unlimited. 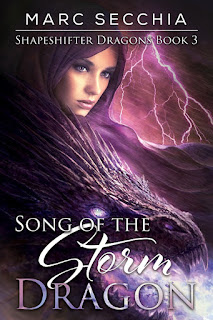 :-) I just couldn't stand to sit (ha ha) on the finished files one moment longer than was necessary, so I hit the button 2 days early and we have - STORM! Enjoy the Dragonride!

About Song of the Storm Dragon:

The Storm is coming! The hegemony of Sylakia has been broken and freedom won, but at a shattering cost. Laid low by the vile Shapeshifter pox and Thoralian’s wiles, can Aranya rise again? For war sweeps Herimor at the touch of the Marshal’s evil claws, and he will stop at nothing to possess the ultimate power.

Now, the race is on to find the First Egg of the Ancient Dragons. Accompanied by her friends Zuziana and Ardan, and the magnificent Land Dragon Leandrial, the Star Dragoness must dive deep in her new quest. Cross the uncrossable Rift-Storm to Herimor. Stop Thoralian. Crush his ambitions. Only then will she be able to save her beloved Dragons.

Arise, o Storm Dragoness! She is legend. She is the whisper of starlight upon Dragon scales. She is Aranya, and this is her song. The Song of the Storm Dragon.