Showing posts from December, 2015
Show all

December 27, 2015
Surprise special! Dragonfriend is free today (27/28 Dec only) please tell a friend or gift it! Find it here: Purchase from Amazon Retweet here: Twitter (Dragonfriend) Dragonfriend is rated 4.6* from 129 reviews and has been a fantasy bestseller since April 2015. The audiobook has just been released. Dragonfriend is one of 6 bestselling Dragon adventures set in the same world.
Post a Comment
Read more

December 21, 2015
So I went to see Star Wars VII yesterday afternoon. Yeah! And left thinking, "I've seen all this before." Great cinematography. Beautiful production. Soulless remake. Great performances from some stellar actors - Harrison Ford most notably - could not lift this much-anticipated movie from the doldrums in which the writers dumped it. Goes to show a $200 million budget is no substitute for strong screenwriting, and beneath that, strong characters and story. I know, human nature being what it is nothing will ever live up to the first trilogy. George Lucas, I doff my hat to you. Awesome. There's no denying the plot of the second, much-maligned 'prequel' trilogy had force, even if the execution left many fans cold. But that's no excuse for essentially lifting the plot of IV and making it bigger. That's it. Where's the creativity, the spark, for which this series is renowned? It's as if all the writers wanted to do was touch every beloved point
3 comments
Read more 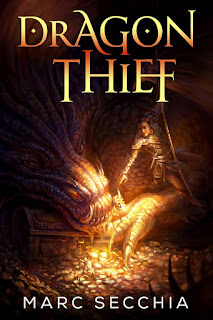 I'm delighted to announce publication of Dragon Thief today! Come experience an unexpected adventure in the world of my bestselling dragon series - Aranya , The Pygmy Dragon and Dragonfriend . A new chapter unfolds in a most unexpected way in the timeline of the Island-World. Hope you like the new cover - check this out! Dragons! Thieves! Mischief and mayhem! All this and more await you in this latest blockbuster adventure on the timeline of the Island-World. What lies beyond the Rim-Wall mountains? What happens when Star Dragons die? Find the answers here! Dragon Thief  Look out for The Onyx Dragon, coming in 2016 - and the Audio edition of Dragonfriend ( audio link ) coming on December 22nd, 2015, narrated by the awesome Erin Bennett!
Post a Comment
Read more

One for the Aussies! C'mon, friends Down Under, please help spread the word - Amazon is promoting Aranya in the AU Amazon store for just $0.99 for the month of December. Don't miss your chance to pick up this bestselling dragon adventure for just 99c. If you want to take home the Ashes, you need awesome dragons, epic aerial battles and fiery adventure. You won't find David Warner in here, but it's the next best thing! Just $0.99 here:  http://www.amazon.com.au/dp/B00KYQR4NG
Post a Comment
Read more
More posts