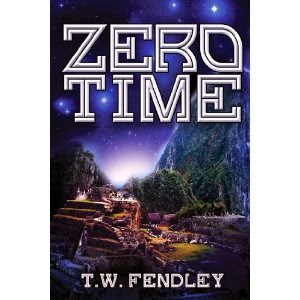 What a terrific time-travel / alternative history adventure! Meticulously researched and imagined, with a Gordian knot of a plot that taxes the grey cells in a most enjoyable way, this is a story different to anything that I've read before, by turns informative, imaginative, and lucidly written. The author has clearly spent a great deal of time constructing a thoroughly believable yet unpredictable plot.

Buy it here!The story is told in two clearly demarcated threads which come together at the end like the very serpent ropes that are the key to travel through space and time in this epic tale - and it certainly is epic, spanning thousands of years. In a bid to save their civilization, people from the planet Omeyocan in the Pleiades travel to Earth to mingle their genes and save the species. They setup the ancient Inca, Maya and Aztec temples which have so baffled and amazed archaeologists. Not only this, but there's a thorough explanation for technologies which are alien to Earth but could provide the abilities shown by some characters in this novel, such as spatial travel, levitation and channeling of energies.At a technical level the editing is perfect and the story told at a good pace. Some readers may struggle with the names, which are difficult to pronounce but absolutely appropriate to the story. I referred to the handy guide at the front. Parental advisory - some violence and a sex scene feature in the book. A fair amount of time is spent on the properties of crystals, vibrations, higher levels of consciousness, chakra points etc. giving the book a New Age feel. Some reviewers commented on this but I felt it gelled well with the tale.Overall assessment? A truly excellent, absorbing tale that is more than worth reading. I learned a great deal while being entertained, which is always a high recommendation. Worth it!!
adventure REVIEW time travel